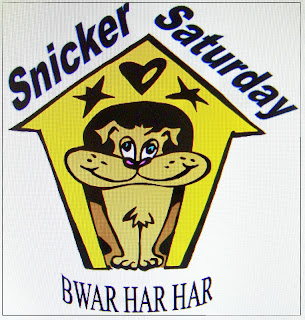 Hey Everyone!
Wow, it's time for your weekly laugh!  I really look forward to trying to give you a good chuckle every Saturday.


Why are gulls named seagulls? If they were by the bay, they'd be bagels!
What's the best day to go to the beach? SUNDAY!
Where does a ship go when it's sick? To the DOCK!
Why do fish swim in salt water? Because pepper makes them sneeze!
What do whales like to put on their toast in the morning? Jellyfish!
Where do rocks like to spend summer vacation? Pebble Beach!
Where does a fish go to borrow money? A loan shark!
Where do ghosts like to swim? The Dead Sea.
What do you call a witch who lives on the beach? A sandwitch!
What does a shark eat for dinner? Fish and ships!

A magician was working on a cruise ship in the Caribbean. The audience would be different each week, so the magician allowed himself to do the same tricks over and over again. There was only one problem: The captain's parrot saw the shows each week and began to understand how the magician did every trick. Once he understood he started shouting in the middle of the show: "Look, it's not the same hat" "Look, he is hiding the flowers under the table" "Hey, why are all the cards the Ace of Spades ?" The magician was furious but couldn't do anything; it was, after all, the captain's parrot. One day the ship had an accident and sank. The magician found himself on a piece of wood in the middle of the ocean with the parrot, of course. They stared at each other with hate, but did not utter a word. This went on for a day and another and another. After a week the parrot said: "OK, I give up. Where's the boat?"


Then I'm celebrating the upcoming Blogville Olympics and Cat-O-Lympics!

Q: Why isn’t suntanning an Olympic sport?
A: Because the best you can ever get is bronze.
Q: Why did they send the Olympic judge out in search of the lost wedding ring?
A: Because he was a medal detector.
Q: Why does the Olympic torch always start in Olympia?
A: Because it’s hard to put out a Greece fire.


Deciding to take up jogging, the middle-aged man was astounded by the
wide selection of jogging shoes available at the local sports shoe
store. While trying on a basic pair of jogging shoe, he noticed a minor
feature and asked the clerk about it. "What's this little pocket thing here on the side for?"
"Oh, that's to carry spare change so you can call your wife to come pick
you up when you've jogged too far."


Two horses were walking back to the stable after a day of training. One
said to the other "I can't understand why we are so slow; we come from
good stock, we have the best of food, great trainers, and yet we come
last in every race."
There was a dog running along side them who overheard and said, "I know
what your problem is. I have seen you race and it looks to me as if you
race off at the start really fast and use up all your energy and then
you have nothing left. What you should do is pace yourselves. What do
you think of that?"
One horse turned to the other and said, "Would you believe that? A
talking dog!"

One Halloween, a trick-or-treater came to a woman's door dressed as
"Rocky" in boxing gloves and satin shorts. Shortly after she gave
him some goodies, he returned for more.
"Aren't you the same 'Rocky' who left my doorstep several minutes
ago?" she asked.
"No," he replied, "I'm 'Rocky II'. I'll be back three more times."

Hey Sarge , that was HOL. We liked. Have a happy Saturday with you and yours.
Best wishes Molly

BOL! We're rolling on the floor with laughter over here. So much that our bellies hurt from laughing so dang much. Thanks for giving us good chuckles so early in the morning.

Don't forget to enter our Raflecopter give away so your humans can get you some Polka Dog treats!

You have done it again, you have made MOM and me LOL and BOL.
Blessings,
Goose

Sarge, you crack me up, I am rolling on the floor. I almost peed myself. You are so funny, "pepper makes them sneeze"! What lounge are you appearing at next??? I will be there right in the front row.

We just love your Saturday Snickers. They make us laugh.