Mrs. Peterson phoned the repairman because her dishwasher quit working. He couldn't accommodate her with an "after-hours" appointment and since she had to go to work, she told him, "I'll leave the key under the mat. Fix the dish washer, leave the bill on the counter, and I'll mail you a check. By the way, I have a large rotweiler inside named Killer; he won't bother you. I also have a parrot, and whatever you do, do not talk to the bird!"

Well, sure enough the dog, Killer, totally ignored the repairman, but the whole time he was there, the parrot cursed, yelled, screamed, and about drove him nuts.

As he was ready to leave, he couldn't resist saying, "You stupid bird, why don't you shut up!"

To which the bird replied, "Killer, get him!" 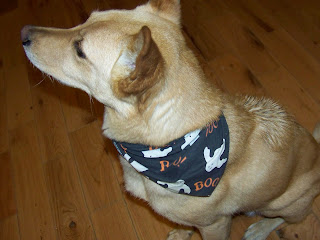 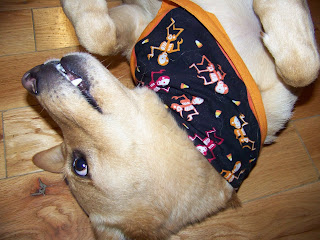 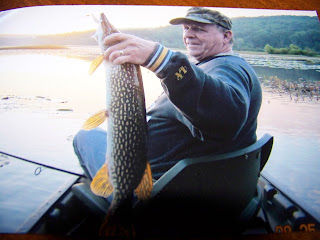 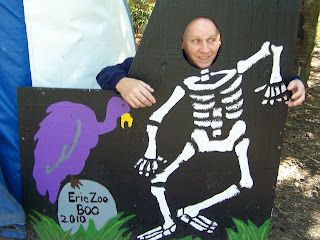 Here's your chuckle for the day.   Complements of my Dad, again.   Here he is goofing around at the Erie Zoo.   If you thought this sort of thing was just for human kids, think again.   Mom says the funniest thing about this little scene is that you won't find a picture of her doing this!
BOL BOL BOL   HAR HAR HAR BWAR
Grr and Woof,
Sarge
Posted by Scooter 16 comments:
Labels: Snicker Saturday - Daffy Dad

Guess what!?!?!    My Dad's brother is famous.  Isn't that exciting??   It sure is to us.   A few weeks ago, Dad left me home alone (whine) to go fishing (yawn) with his brother.  When he got home, he said his brother Danny caught a huge big fish.   Danny sent the pix to this wildlife in PA type magazine for humans thinking it might be included somewhere in the articles for his county.  WELL,   last week the magazine hit the presses and looked like this on the front! 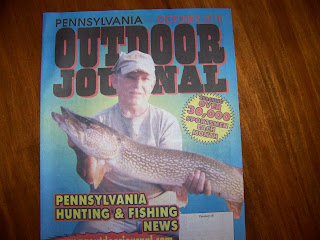 Yep, that's him!    Famous Danny with his whopper fish.  He will be signing autographs at a Cabela's or Bass Pro Shop near you....just kidding, but he sure is proud of that slimmy, stinky catch!
Grr and Woof,
Sarge
Posted by Scooter 19 comments:

Today my Mom started a new job.  She keeps telling me I need to get a job to support my toy and treat habbit, but so far I keep ignoring her.  ahem   Anyway, my Mom works for Pennsylvania.  She does something called Human Resources...again, this can't be as good as doggie resources, but anyway this is her job.  She used to work at a kinda hospital, but today she started with a new place helping Pennsylvania workers retire.  She's really happy.  It is closer to home, so we're all happy...more time at home with her beloved me, Sarge.   Last Friday was her last day at the hospital place and her friends gave her this to wish her luck.   I love it when Mom & Dad let nature into our house, so I thought I'd share... 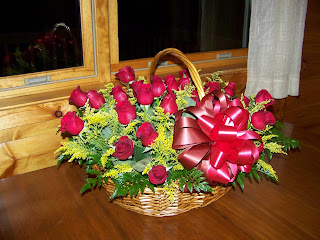 It's great when nature comes inside and it isn't something for me to worry about like a chipmunk or a bear.

Here's your chuckle for the day...this time at my expense.  I don't mind sharing a BOL even with me as the target.   Here's how it happened:

So last night I wake up from a productive nap and all of a sudden I sense a strange presence in my living room.  High alert and on duty!   First, I stalked it...    Then I gave it my best K9 Grrrrrrrrrrr...    Then I hit it with my most business-like BARK.      Well, you won't believe this, but it wasn't even the least bit nervous and it definitely didn't run.  WHAT???    Okay, so I go through the whole routine again.   Stalk...Grrrr...BARK.   Nothing.     So then, my Mom walked right up to this lumpy human/creature thingy on our couch and.....wait for it....she touched it!    GASP   I went into full berzerk mode then.  All out attack with everything I had in me.    This is the scene: 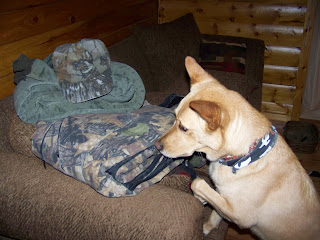 So, then the punchline...  ahem.
Mom picked up the top thingy, and yes, these are my Dad's clothes.  Oh, Mom and Dad were practically rolling on the floor.  Here I was ready to throw down my life to attack this horrid thing...but alas, it was a hat and coveralls.   BOL BOL   HARHARAHRHARHARHARHAR. 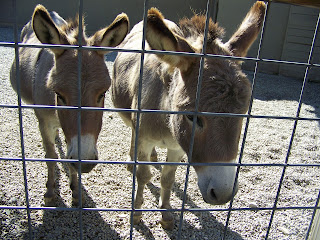 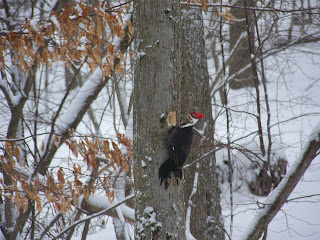 Here are some pix of my having fun with PantsLegs.  That's my Cousin Frankie's Dad!  He's the best and most fun to do this with.  Check out this action... 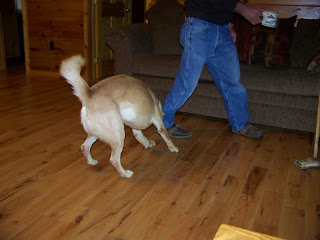 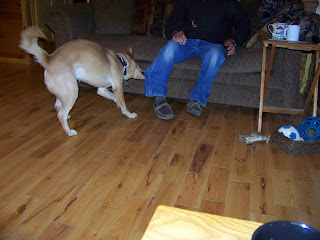 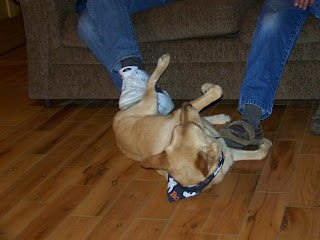 Then because I was such a good leg-getter, then I get a great tummy rub!
Grr and Woof,
Sarge
Posted by Scooter 14 comments:
Labels: Snicker Saturday - PantsLegs

Since I'm new to the doggie bloggies, I thought you might like to see where I live.   Here you go... 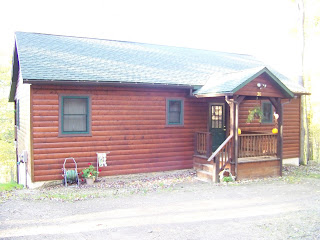 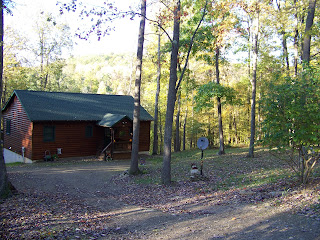 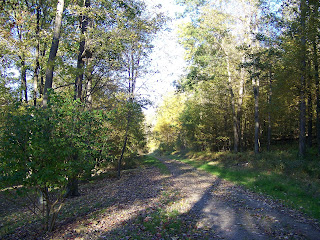 My street...unpaved...I live in the woods! 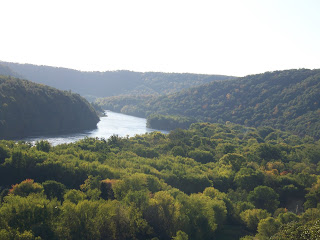 My river...down below my house. 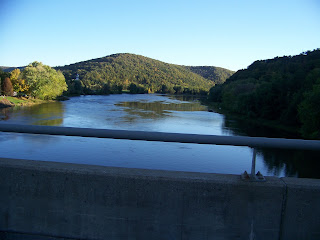 My river, again...down in my hometown.

Wordless Wednesday - Bandits on My Deck 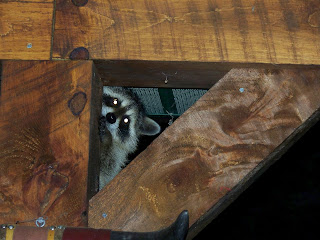 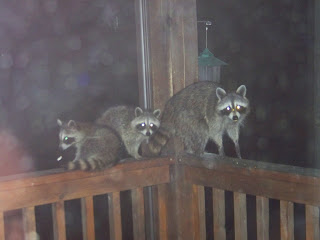 Posted by Scooter 14 comments:
Labels: Bandits on My Deck

Hey everyone.  Happy Friday!    I'm busy here at home visiting with (and torturing) Cousin Frankie.  I really do like the little furry guy, but he's in my territory and I just can't help myself.  I try to be nice, but every now and then I gotta show him who's in charge here in my yard.  Anyway, since I'm tied up, here's just a quick post of a pix we ran across last weekend...thought it might remind you all of someone we know... 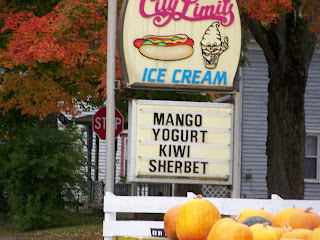