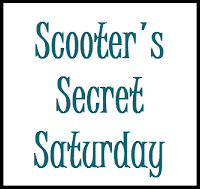 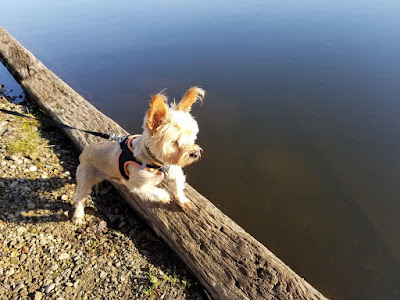 So, I barked the other day that my peeps adopted me from a really nice shelter in NW Pennsylvania.  Well, that has caused them some questions and a lot of mysteries about me.  BOL

I had been wandering the streets of that county for a couple of weeks, they think, before I went to the shelter.  Butt, no one knows what my life was like before that.    No one, except me!   So, I have some secrets.   I thought I'd post about them and see what all of you think.

Did my story start in that county in NW Pennsylvania?   Maybe.   Maybe not.

The shelter folks checked me right away and found I have a microchip.   Okay, that's a clue.  Maybe.  Butt, the chip had never been registered.   Who knows why not.    Hmmmm.   My peeps called the chip company and found out that it had been purchased in a big group of chips by a pet store chain in Missouri, clear back in 2008.   Now, I'm no where that old.  BOL    And NW Pennsylvania is no where near Missouri.

This is my first secret.   Where am I really from?   I'm not telling and it's driving my peeps crazy.

Ugh. Our kitty, Owen, has the same mysteries. We adopted him at the shelter and their true names and backgrounds are never revealed. I think that information would be really helpful for the new families to know.

I'm thinking like Yamini....puppy farm. Either way, I am so glad that you found a new home.

P.S. I LOVE LOVE LOVE your ears!! They are little antennae!

Oh Scooter, you are too cute. We are so excited that you have found such a great home. We know you will be a happy pup there. You all have a wonderful day.

The Ladies of Beaglebratz Manor said...

Good mornin'Scooter - we live rite next door to Missouri an'our mom haz herd a lot of storiez'bout thoze puppy farmz plus the idea of pet store so yep, she agreez with Yamini. Butt like the otherz here say, that iz in the past an'now iz all that matterz - u gotta great home now. Miss Maizie here - my mom didn't git me frum a shelter butt my old family in Oklahoma didn't want me no more so mom brought me to Kansas - like it here so much better.
Lady Shasta'n Miss Maizie

wow that is a miracle... but maybe the blogville detectives can help you to find it out?

That's quite a mystery!

My word above Scooter you are for sure a mystery....and in my humble opinion....you were a special delivery from above orchestrated by the one and only top cop Sarge.

Missouri....wow who really knows. Odd that the microchip that was purchased way back in 2008 was still registering.
You look to be in very good condition so we don't think you were lost very long.
Hugs madi your bfff

We bet there are lots of secrets in your past, Scooter, but sometimes they really don't matter. All that matters now is that you have yourself a wonderful forever home.

That is quite a mystery about your chip Scooter. We agree with everyone else and say that your story moving forward is what is most important.

We're thinkin' puppy farm BUTT with a pet store chain, you could be from anywhere!

Sounds like you're quite the mystery Scooter! Butts nows that you have found your family, I say you write your own story! And, you can make your past what ever adventure you want it to have been....who would knows any different??? Pirates, riding the rails, mountain adventurer....margarita truck driver....
Impawtent thing is the story you are about to live
Kisses,
Ruby ♥

Well Scooter wherever you are actually from, we know where you are NOW and that's the BEST PART! Besides, I think it's kinda cool to keep a FEW secrets don't you? My Mom and Dad don't know a thing about my first year before they adopted me from the shelter either - I like being a man of mystery!

Hailey and Zaphod and their Lady said...

Welcome to Blogville Scooter! We can't wait to follow your adventures!

What we do know Scooter is you are now right where you belong!
Hugs
HAZEL & MABEL

hello scooter its dennis the vizsla dog hay wow i think yoo ar an internashunal dog of mistry just like me!!! did yoo yoozed to be a spy??? ok bye

Scooter, where ever your from it doesn't matter
you are home now and it's forever.
Astro is from Texas and Mitzie is from Calif
but they now live in Washington.
I think your mom could put you in her purse and you could
go shopping with her for treats.

Hi Scooter! Grrrreat to meet you, wherever you are from.
Toodle pip!
Bertie.
PS Gail and I think you have first class ears!

We enjoyed this post so much. There is always a great mystery fro the story that you shared. Thanks for sharing. Have a fantastic rest of your week.
World of Animals

Keeping a dog mentally stimulated is important. If we don’t pay enough attention to our dogs’ minds, they often become bored or start misbehaving, and their mental health can quickly deteriorate. To avoid these problems, here are 5 quick tips to challenge your dog’s brainpower and turn him into a genius!

1) Go off the Beaten Path

Yes, literally, walk your dog on new routes every once in a while. If you take your dog on walks using the same path each and every day, he’s missing opportunities to come across anything new. But don’t limit this philosophy to walks; expand it to all areas of your dog’s life. Teach your dog a new skill, let him sniff new places, or try taking part in a doggy sport. Keep your dog’s environment full of new and exciting things, and offer him plenty of opportunities to use his brain.

Dogs can be quite determined when it comes to getting the things they want, so why not use this to put their brains to work? If your dog wants a toy, try placing it under a laundry basket or hiding it under a blanket (making sure he sees you put it there). Then, sit back and watch him use his problem-solving skills to try and get it. When he solves the puzzle, praise him just as he reaches for the toy.

If your dog struggles or gets frustrated, make the exercise easier at first, and then gradually make it harder and harder over time.

Dogs are always ready to learn new words, so why not take the time to expand your dog’s vocabulary? For example, you could start saying “let’s go potty” just before opening the door to let your dog out. After doing this often enough, your dog should come running over to be let out whenever you say “let’s go potty.” Dogs are pretty fast to learn to associate a particular action with a word, and are quick to anticipate what will happen next, so you will usually see results very quickly.

Don’t stop training your dog when he reaches his golden years. “If you don’t use it, you lose it” especially applies to senior dogs. Yes, old dogs can learn new tricks, the only thing is, they may take just a little bit longer to learn them, but be patient and you’ll be pleasantly surprised. So don’t let that brain go to rust, a dog’s brain never loses its ability to learn new things so long as you give it the chance.

The brain is like a muscle – if you don’t challenge it, it won’t grow! That’s why the best way to make your dog smarter is by teaching him special “brain games” and “brain exercises.” Brain games are fun little games you can play with your dog to teach him new skills and increase his intelligence. Here’s a great “Brain Training for Dogs” course containing 21 awesome brain games, including treasure hunts, hide and seek, playing the piano, and much more, that will take you step-by-step as you turn your dog into a well-behaved and obedient genius! Be sure to check it out here:

>>> Get Brain Training for Dogs today