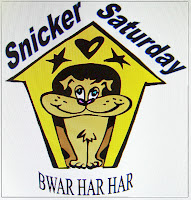 The animals were bored. Finally, the lion had an idea. "I know a really exciting game that the humans play called football. I've seen it on T.V."  He proceeded to describe it to the rest of the animals and they all got excited about it so they decided to play. They went out to the field and chose up teams and were ready to begin.

The lion's team received. They were able to get two first downs and then had to punt. The mule punted and the rhino was back deep for the kick. He caught the ball, lowered his head and charged. First, he crushed a roadrunner, then two rabbits. He gored a wildebeast, knocked over two cows, and broke through to daylight, scoring six.

Unfortunately, they lacked a placekicker, and the score remained 6 - 0.

Late in the first half the lion's team scored a touchdown and the mule kicked the extra point. The lion's team led at halftime 7 - 6. In the locker room, the lion gave a peptalk.  "Look you guys. We can win this game. We've got the lead and they only have one real threat. We've got to keep the ball away from the rhino, he's a killer. Mule, when you kick off be sure to keep it away from the rhino."

The second half began. Just as the mule was about to kick off, the rhino's team changed formation and the ball went directly to the rhino. Once again, the rhino lowered his head and was off running. First, he stomped two gazelles. He skewered a zebra, and bulldozed an elephant out of the way. It looked like he was home free. Suddenly at the twenty yard line, he dropped over dead. There were no other animals in sight anywhere near him. The lion went over to see what had happened. Right next to the dead rhino he saw a small centipede.

"Did you do this?" he asked the centipede.
"Yeah, I did." the centipede replied.
The lion retorted, "Where were you during the first half?"
"I was putting on my shoes."

FYI; got your email will do it later this weekend ... maybe next one will be your blog. Golden Woofs

STELLA and RORY from Down Under said...

Sarge, we was thinking, oh oh, we don't know much about American footy so probably won't get the joke, but it was hilarious. Good one! No worries, and love, Stella and Rory

You is so funny!

great chuckle, Sarge. Mom says she hoped that centipede had velcro shoes and not lace ones - BOLOLOL.

I probably have enough shoes for a centipede. They're all different styles though.

Oh Sarge! You guys are too funny there! GUESS WHAT? Jazzi said I pulled your name for the Christmas pressie exchange. Can you email my momma some of your details for your wish list? And your addy? marianne(dot)d(dot)howard@gmail.com Looking forward to it!!