Chief of Police, Sarge here with Chief Deputy Zona to further update the community regarding the status of recent crimes in our fair city.

Chief of Detectives, Pip along with Private Investigator, Puddles recently announced that their hard work and dedication has resulted in the naming of suspects in the Mayor Furter residence break-in and kidnapping as well as the grand theft of Puddles' Pinto.    Chief Deputy Zona has interviewed the subject known as Charcoal and cleared him of any wrong-doing.  On the contrary, Charcoal is to be commended in this matter.  The evidence has shown that upon hearing the shattering of glass, Charcoal selflessly entered the Furter residence in an attempt to capture the criminals.  He did succeed in running them off before more damage was done.  For his heroism, Charcoal has the thanks of this department and the community of Blogville.  Nice job, Bugs (ahem).

Combining the findings of Pip and Puddles with the eyewitness statements of neighbor, Jim the Grinch Guy and information provided by Charcoal, we are confident in the identities of our criminals.  Accordingly, Zona and I have conducted a very fun...er...uh...productive stakeout of the territory known to be frequented by the suspects.  Detailed photos follow this report.   We can announce that the kidnap and carnap victims have both been observed during this stakeout and both appear to be unharmed.   The location of the criminals' hideout is confirmed and under observation.  Hopefully, this will lead to an arrest and retrieval of the victims in the days to come.

We are asking for the public's continued patience and support as an arrest is emin...er forthcom...uh...about to take place.  More details will be released when an arrest is made in this case.  We are confident that the criminals will be arrested quickly and safely.  Documentation of these events are being metick...dutyfl...kept in great order by Civilian Desk Clerk Mona.

On behalf of Deputy Zona, Detective Pip, Investigator Puddles and Clerk Mona we thank you for your attention. 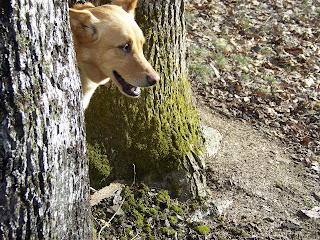 Pssst, Zona...do you see them? 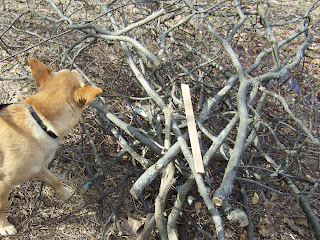 So that's their hang out!  Shhhhhh
**I wonder how they got the Pinto up that tree?** 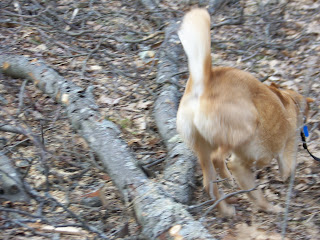 Has there been a ransom note?

Wow! That detective business is a LOT of work! Hope an arrest will take place soon so you can take a break from all that hard work and get in some quality PLAY time!

Blogville is in such Fine Paws!!! I hope that Trick is OK. Slick and I are sooooo very much worried about him.
Grrrreat Peeking out Place buddy.

When you asked me to be your deputy, I never once thought I'd see a pinto in a TREE! Amazing! It's frightening the lengths these tree rats will go to... I'll have some more evidence to you this afternoon!!

We just knew we could count on our law enforcement agency. We will be looking forward to the final report and sentencing.

Great job, buddy. Blogville is very lucky to have such great law enforcers on the job!

I am so happy you are on the case!

I feel so much safer with you in Blogville, Sarge!

You are doing a great job!!

Nice work Sarge and Zona! Uh, you might not want to stand under that tree with the pinto - the branches seem to be shaking! Watch out everybody!

I knew you and Kona would find the culprits!
I want to see when you arrest them!
Happy Saturday!
Kisses and hugs
Lorenza

LMAO!
Thanks to you all for keeping us safe and working on this case.