Good morning.  In an effort to keep the public informed with regards to the current investigation of Blogville's recent criminal activities, the BPD is issuing the following press release.   Along with Chief Deputy Zona, a thorough interview has been conducted with the caller who initially reported the incident at Mayor Furter's residence.   Following are the results of that interview.

Chief Sarge:  Would you please identify yourself for the record?
Caller:  No.  I wish to remain annonymous.
Chief:  Really?  Wow, grrrrruff way to start.  Lemme try again... We would like to verify your indentity for the report.
Caller:   Right.  I heard you.  No!
Deputy Zona:  Okay, we can protect your identity from the public, but you really must show us proof of your id.
Caller:  Oh, okay, no problem.  All she had to do was ask.
Chief Sarge:  WOW, I DIDN'T RECOGNIZE YOU!!   OMD   Okay, um, well.  Let's continue.  What alerted you to a situation at Mayor Frankie Furter's residence?
Caller:    I was walking in my neighborhood when I heard breaking glass.   Since I hadn't dropped my beer bottle, I wondered what it was.  I looked up towards Frankie's house and could hear some commotion, but it was dark enough I couldn't see really good.  Moments later, I saw what looked like critters scurrying away from the house and heading for the woods.
Chief Sarge:  How many did you see and could you describe them?
Caller:  *&^&*^@! no.  I said it was mostly dark.
Deputy Zona:  Well, do you have any idea how many and what they might have looked like?
Caller:  Oh, okay, of course.  There seemed to be several of them...all running kinda quick-like.  I'd say they were smaller than an elephant, but bigger than a crickett.
Chief Sarge:  Okay.  Now we're getting somewhere.  Can you describe them!?  Were they carrying anything?
Caller:  How should I know...it was mostly dark.
Deputy Zona:  Do you think they took anything with them?
Caller:  Oh, yeah.  It looked like they had a few things dragging along with them.
Chief Sarge:  Please describe the best you can...since it was "mostly dark"...what they were dragging.  And would you reconsider and identify yourself publicly?
Caller:  No!  I don't want involved in this mess.  I couldn't tell what they had.
Chief Sarge:  Okay.  What happened next?
Caller:  After all that ruckus, the last thing I saw was a small, dark grey-ish looking furball with big ears.  It came outa the house dead last...sorta after all the others had run off.    It scurried right after them and disappeared into the woods.
Deputy Zona:  What did you do after that?
Caller:  I went straight home and called the Police Department to report what I heard and saw.  I spoke to that nice Clerk, Mona.  She took down the info and told me I would be contacted by the Chief.  She got my name and number, but said I could stay anonymous to the public.
Deputy Zona:  You've been very helpful.  Is there anything to add, and would you please reconsider and identify yourself for the citizens of Blogville?
Caller:  I got nothing else to add.  I'm just trying to be a good citizen and neighbor.  Frankie's a swell guy.  Oh well, okay.  I guess it won't hurt to say...  They call me JIM...JIM THE GRINCH GUY.

The preceding transcript has been turned over to our very competent Chief Detective, Pip for his continued investigation.  More details will be made public as they become available and have been verified.

Thank you, Mr. Grinch Guy for your cooperation in this matter, and for being a good citizen. 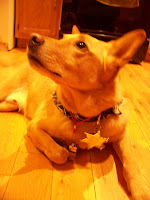 Looks like this case isn't "getting cold" after all. I was fearing that NO ONE would have the guts to come forward to provide some information regarding the break-in & robbery. Thank DOG you finally have your 1st witness. Now let's hope more would come forward & provide more crucial information. This culprit MUST be caught soon before he/she/it continues with the robbery spree!

So glad professionals are handling this case! We're totally stumped! And now it's weekend so you guys are on overtime! Hope you get extra treats for that :)

Hey Road Dogs!
Wow, good point about the overtime! I better order in another case of Drunkin...er I mean Dunkin Donuts!!! We're working up an appetite!
Grr and Woof,
Sarge, COP

I can't believe it... It was actually Jim the Grinch Guy who reported the "Incident"??? Are you SURE... beclaws he usually just gives me a RUFF time. I mean like the time he took Jennifer the Jeep to his garage and held her hostage fur like 87 days until my mom had to bake Oatmeal Cookies and send down there to get her Sprung.
I wonder if he knows anything about Puddles' Pinto... since HE (Jim the Grinch guy) likes to hold vehicles HOSTAGE and all.

Hmmmm, could it be the Charcoals? But that would mean they must be a Mr. and Mrs. and have developped a furamily. Maybe we should also consider those squirrels. Sarge, you and Zone with Mona's assistance are really starting to get closer to identifying the perpetrator(s). Good luck.

Good work! I need to keep away from this until the day in Court to remain fair.... Keep up the good work, my friend....

Thank goodness the experienced are handling the case!
Benny & Lily

Greyish SQUIRRELS.....I knowed Frankie should have stopped chasing dem! Now dey is getting even!

This is quite a caper. Rest assured, I am on the case. If someone could just give me a hand with all this evidence, it is bit a heavy for me to carry and this detective jacket is in the way. (bump, crash, bang ...falls down stairs). No worries, I meant to do that, all part of my grand plan to fake out the bad guys.

Huh? The Charcoals family??
I hope not! They said they were Frankie's friends!
Hmmm....
Kisses and hugs
Lorenza

Good work, sarge! We have absolute faith on you and your team..It won't be long now ...we can feel it in our bones those miscreants are just around the corner..
Wags,
Gin, Bud n Shadow

I hope you crack it soon, need you back as drummer fur PawsBang soon. Drop me a peemail at pepsithelazybum(at)gmail(dot)com would you?

IT WAS THE CHARCOALS, I JUST KNOW IT!!!
sneaky little bunnies...tryin' to look all cutesies, but they are really just plucky little thieves!!!

pee s -- you sure are right about miss mayzie bein' a grrreat smoocher! :D

This case is really heatin' up! We suspect the squirrels are the alleged culprits...

Hmm.. nice detective work but I'd paw it was those rascally squirrels too.
norwood